HUNTSVILLE, Alabama — The cheerleaders wanted to make signs to support the football team but didn’t even have marking pens in the budget.
One team had to forfeit a game because it couldn’t pay the transportation bill to travel to the other school. Another can’t even afford sports drinks for its team on game night. That’s the harsh reality for some Huntsville schools in this era of budget cuts and a sour economy
that limits parental and booster financial involvement.

Partners for Athletes and Leaders in Schools (PALS), a non-profit corporation, has been established in Huntsville to assist struggling athletic programs meet specific needs. Its goal is to offer supplemental support but not to replace school booster clubs or established budgets.
As it says in its mission statement, “PALS support is given in the form of equipment, event sponsorship, transportation supplements, talent showcasing, educational assistance and scholarships to further the technical skills and enhance the leadership development of our school students.”

The organization will work with public high schools and middle schools in the city of Huntsville, supporting athletics, dance, cheerleading and band programs. Individual school principals will be able to contact PALS with requests that might be beyond the realm of the current budgets.
School superintendent Dr. Casey Wardynski has given his approval for PALS and said current budgets won’t be impacted by the creation of PALS and its supplemental support.

The group’s first fund-raising project is a “celebrity waiter” event Monday night from 5 to 8 at Rolo’s Cafe on Airport Road, with a number of the community’s civic leaders serving to collect donations.

According to PALS president Cynthia Streams, PALS is “the vision and brainchild” of Greg Patterson, director of Huntsville Parks and Recreation Department, and Kevin Wieseman, Huntsville City Schools athletics director. They were particularly inspired by Birmingham Athletic
Partnership (BAP), and met with officials there. BAP, founded in March 2002, has raised more than $300,000 to assist 10 Birmingham schools.
Its projects have been as modest as coaching clinics, as ambitious as providing assistance to send the schools’ quarterbacks to the prestigious summertime Manning Quarterback Camp. “We started this knowing we have disparity with what booster clubs can do or even
if there is the existence of a booster club,” Streams said. “We all know what’s happening with state and city funding – the need is there. But we don’t even know depths of requests from the principals yet.”

PALS will be seeking individual and corporate support. Streams said there will be an effort to work with smaller companies that might want to make an impact in the community but might feel stretched to thin or where to begin. “They can come to PALS and we’ll have the
knowledge of where the needs are,” she said.

A PALS board of directors has been established and a slate of officers elected. Along with Streams, they include vice president Sarah Chappell, treasurer James Brown and secretary Rena Anderson.

“We want this to be a long-term success,” Streams said. “We’re taking our time, doing a lot preliminary work determining who we are, what we can do, what’s the best way. It’s in its infancy, but it’s exciting! 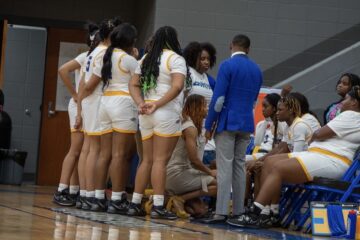 My name is Sierra Jones and I’m the head Girls Basketball coach at Mae Jemison High School in Huntsville,AL. At the end of my first year, I looked at our jerseys as they were 5 Read more…